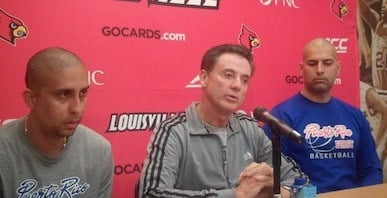 LOUISVILLE, Ky. (WDRB) – Translation was not optional during Rick Pitino’s press conference Thursday when he outlined the University of Louisville basketball program’s trip to Puerto Rico next week.

Actually, if you’re recruiting a translator, I’d suggest getting two. (The NCAA and I would also recommend not giving players $7 to play laser tag out of season, but that’s another story.)

You had to understand Spanish to handle the opening flurry of questions for Pitino and two of his assistants that came from the Puerto Rican media. I’ll get to that later, maybe when Pitino coaches the Puerto Rico national team in an Olympic qualifier in Mexico City, starting Aug. 31.

But as this young U of L team prepares to play nine exhibition games in six days next week, the more pressing need is for somebody to translate Pitino Speak.

You understand the game. Sorting through the bursts of hyperbolic praise. Determining what Pitino is actually saying when he doesn’t directly answer a question.